The Ultimate Expedition: The Falklands, South Georgia, and Antarctica

If your organization has intrepid travelers, with a passion for nature and polar exploration, there is perhaps no journey more spectacular than sailing to Antarctica by way of the Falklands and South Georgia Island.

Is this an expedition to consider for your group or organization? If you have ever considered such an adventure, follow the photo journal below to get a preview. Then, if you are interested in offering it to your travelers, Holbrook will provide you with a generous commission and enviable bragging rights. Contact us for details on our 2020 sailings. 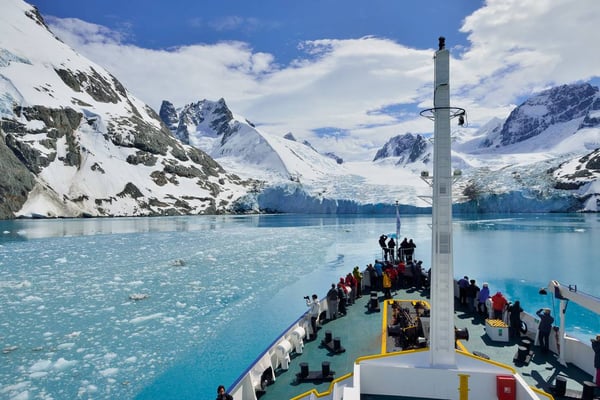 What makes this expedition “ultimate”?

The setting of mountains, sea and ice is as grand as any place on Earth -- a photographer and birder’s paradise! Hike the rocky shores of the Falkland Islands to see nesting albatross and the first of six penguin species. Relive Shackleton’s historic voyage on stunning South George Island and witness lively crowds of King Penguins. Along the peninsula, watch a rugged, isolated, and serene world come to life as scores of penguins plunge for food, herds of elephant seals lie in the sun, and pods of orcas cruise by. This journey is a one-of-a-kind experience with boundless wildlife and captivating landscapes.

Now sit back, and embark on a photo journey with traveler Sarah Williams!

Arriving to the Falkland Islands

DECEMBER 2018 - On the second morning I woke to a bright day and was up on deck to see us sail through the Woolly Gut, a narrow gap between two islands. The hillsides were painted bright yellow with gorse, which was in full flower. Our first shore landing was at Carcass Island. And for many of us, this was our first journey in a Zodiac boat, but everyone managed to arrive on shore with only their boots getting wet. 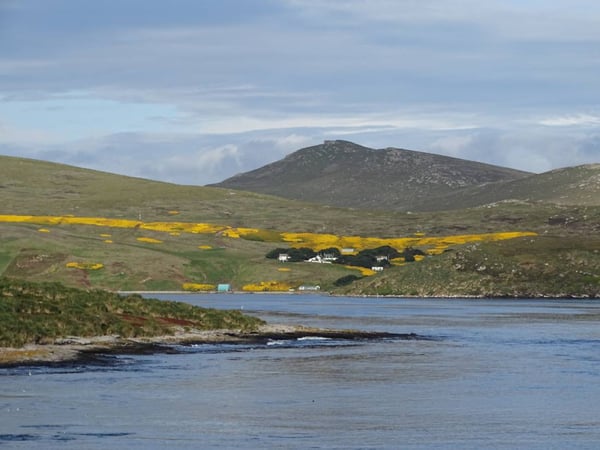 This was also our first sightings of Magellanic Penguins, which have underground burrows, and Gentoo Penguins, which form nests above ground and steal suitable nesting material from others if given half a chance! On the beautiful, white, sandy Leopard Beach, we saw lots of Upland Geese and a Striated Caracara tucking into carrion.

During lunch we sailed around to Saunders Island, where we were able to see our first King Penguins, including young ones who looked like they were wearing big brown fur coats. There were also large colonies of King Cormorants, which have amazing blue eyes and bright orange blobs at the end of their bills, and Black-browed Albatrosses, who are just serenely beautiful. The group of Rockhopper Penguins, with their yellow eyebrow tufts, were the only colony we were going to see, so I took my time observing these amusing characters. 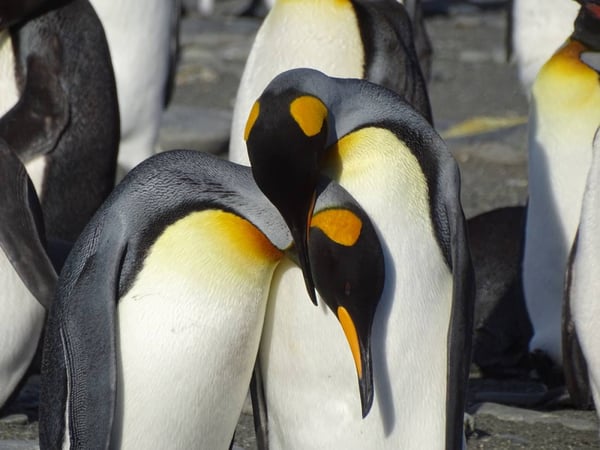 The following morning saw us arrive at Port Stanley. For many British people, this location is etched in our memories. It was a beautiful, sunny day to wander around, visit the cathedral, and walk past the office of the local newspaper, Penguin News. We also visited the Margaret Thatcher Memorial and the Governor’s Residence.

Our arrival day at South Georgia we were taken ashore to Salisbury Plain, home to Fur Seals, which can be very feisty about human intrusion. We also saw many thousands of King Penguins. The sight of King Penguins as far as the eye could see, gathered under beautiful snow-covered mountains, was a vision that will remain in my memory for a very long time. 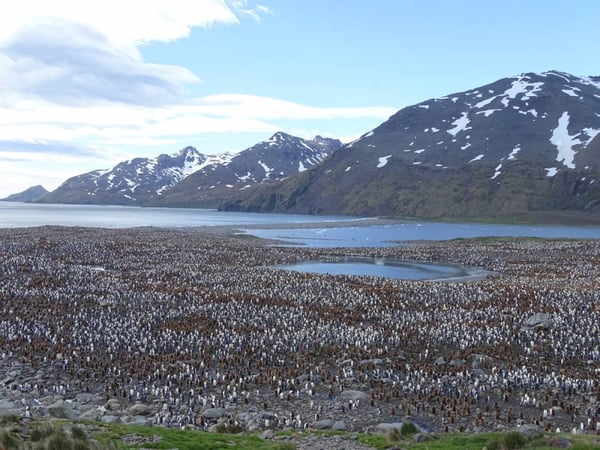 The following day we visited St. Andrews Bay, where a large group of King Penguins were on the beach where the Zodiacs landed, providing their own welcoming committee. On the other side, I walked to the top of a small hill, where I was greeted with the sight of the largest King Penguin rookery in South Georgia - an unbelievable spectacle! I sat down and tried to absorb the view before me, this mass of King Penguins dwarfed by glacier-covered mountains set against a pale blue sky.

The next morning our Zodiacs took us ashore to Grytviken. It was a perfect day, with the sun shining and no wind. The first stop was the cemetery where Sir Ernest Shackleton’s grave is located. We were each given a tot of whisky from a bottle of Shackleton Whisky, which has been reproduced from the original blend that was apparently found after his expedition. Victoria, the historian on board, proposed a toast to “the Boss,” as Shackleton was known by his men, and we lifted our cups and drank to this extraordinary explorer. There was plenty of time to wander around the old whaling station, with Fur Seals lying amongst the decaying equipment of the whaling industry that once occupied this bay. 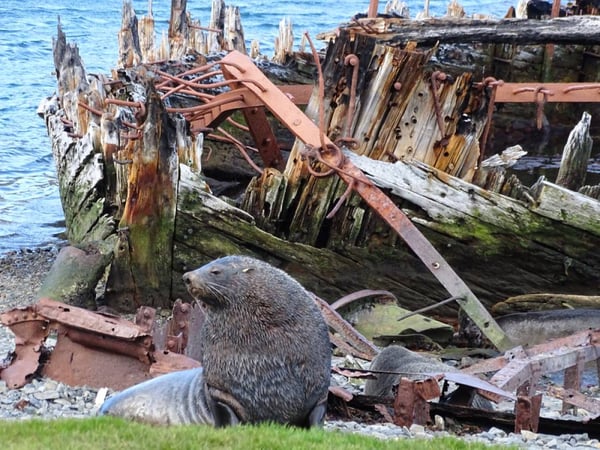 In the small museum I found a replica of the James Caird, the boat Shackleton used to reach South Georgia from Elephant island, an unbelievable journey of courage against all odds. I found the small, white whalers church to be particularly poignant. Built in 1913, this modest building was essential to the men who worked in this brutal environment, many miles from their homes and families. In the back room was a library where the bookcases groaned under the weight of well-thumbed books. 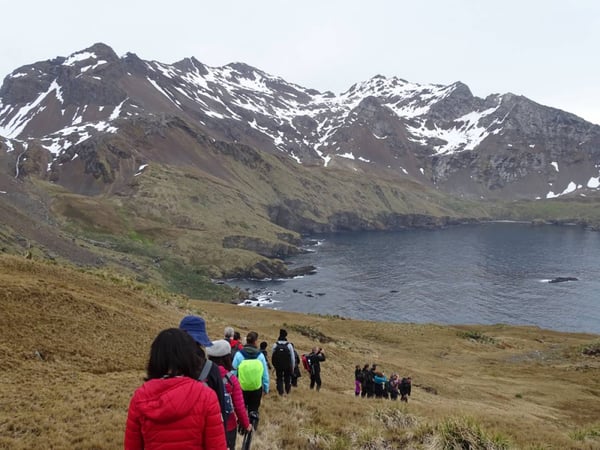 It was a very early start for our last day on South Georgia, visiting Gold Harbor. The beach was much smaller than previous places we had visited, so everything was right there as you stepped off the Zodiac; a massive colony of King Penguins, Fur Seals and pups, Elephant Seals of various ages and a stunning backdrop of glaciers and snow-capped mountains. In the afternoon we sailed along the southern coastline. A pod of Humpback Whales entertained us before we headed for Drygalski Fjord, which has to be one of the most beautiful locations on the planet.

Heading to the Antarctic Peninsula

During the night we crossed the 60-degree line, meaning we were now officially in Antarctica! We arrived at the scenic Laurie Island in the South Orkney Islands, on a gorgeous bright sunny day. This is where the Scottish explorer Williams Spears Bruce built a hut in 1903, the remains of which can still be seen. However, the Argentinians now have a base here, Orcadas Research Station, and they kindly showed us around their museum and the cemetery before we enjoyed a coffee in the warmth of their main quarters. 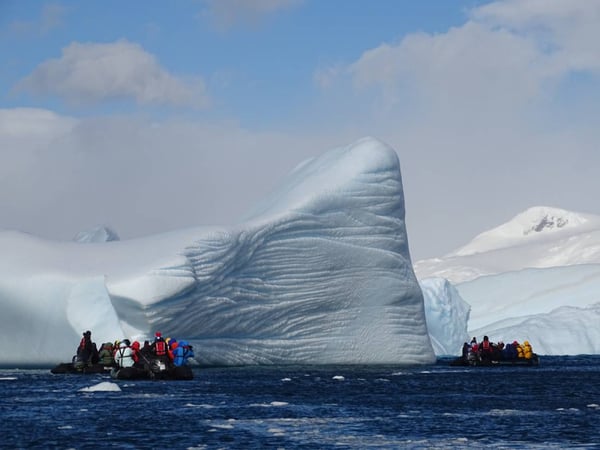 As we sailed out of Scotia Bay, we were treated to the sight of incredible icebergs of all shapes and sizes, which were sparkling in the sunshine. Over the next 24 hours, we began to see many more icebergs, including one massive tabular iceberg the captain estimated as being 2 miles across!

We then sailed through the Antarctic Sound a large pod of Humpback Whales swam around the ship, impressing us with their diving skills and showing off their tail flukes. In the afternoon we went ashore at Browns Bluff, where there is a large Adélie Penguin colony (our sixth species of penguin), some of which had fluffy grey chicks. 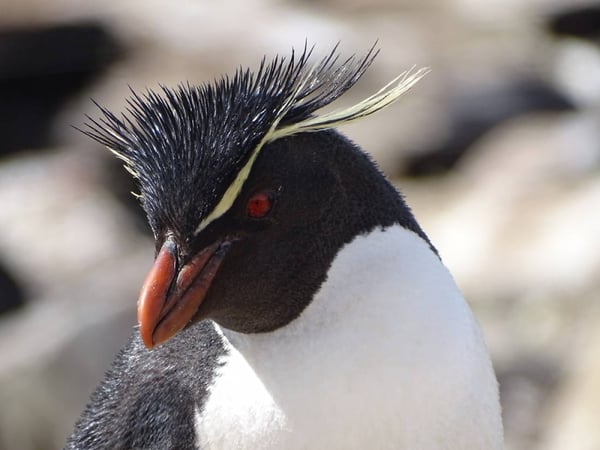 The following morning we arrived in the South Shetland Islands and Half Moon Island, another incredibly scenic spot. I’m running out of superlatives! There was a large colony of Chinstrap Penguins here, along with a solitary Macaroni Penguin. The scenery was amazing, and we even found a Weddell Seal lazing on the rocks. Back at the landing beach, some of the passengers decided to take the polar plunge while the rest of looked on in admiration - or possibly bewilderment! 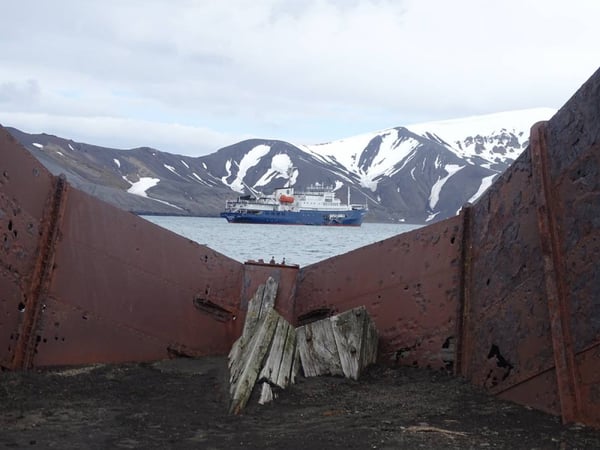 During lunch we sailed to Deception Island, which is a collapsed caldera now providing a natural harbor. The volcano last erupted in the 1960s. Entry is only possible in good weather, through a narrow gap called Neptune’s Bellows. We went ashore at Whalers Bay, which as the name suggests was a whaling station as long ago as 1911. I found the place to have a strange melancholic atmosphere, with steam rising from the black sand reminding you of the volcanic history, while the buildings were all collapsing and rusting. 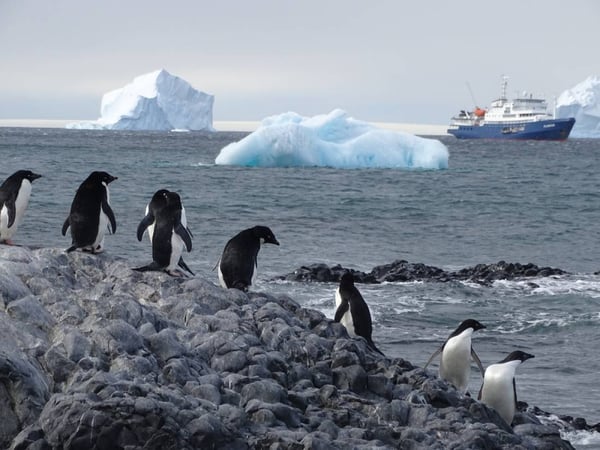 We sailed back to the Antarctic Peninsula, through the Gerlache Strait, on to Port Lockroy where there is a post office, shop, and museum where you can stamp your passport, marking your journey to this southernmost point. Gentoo Penguins were nesting on any available space, even under the British flag, and chicks were due to appear any day.

Across the channel to Ushuaia

The next morning I felt quite sad that this was our last day in Antarctica, but the weather could not have been better: clear, bright and sunny. It was a memorable way to end such an incredible experience. The cruise had been jam-packed with the most extraordinary experiences: We had seen wildlife aplenty, enjoyed the most incredible scenery, been educated from the many lectures, made new friends, and had been blessed with good weather. 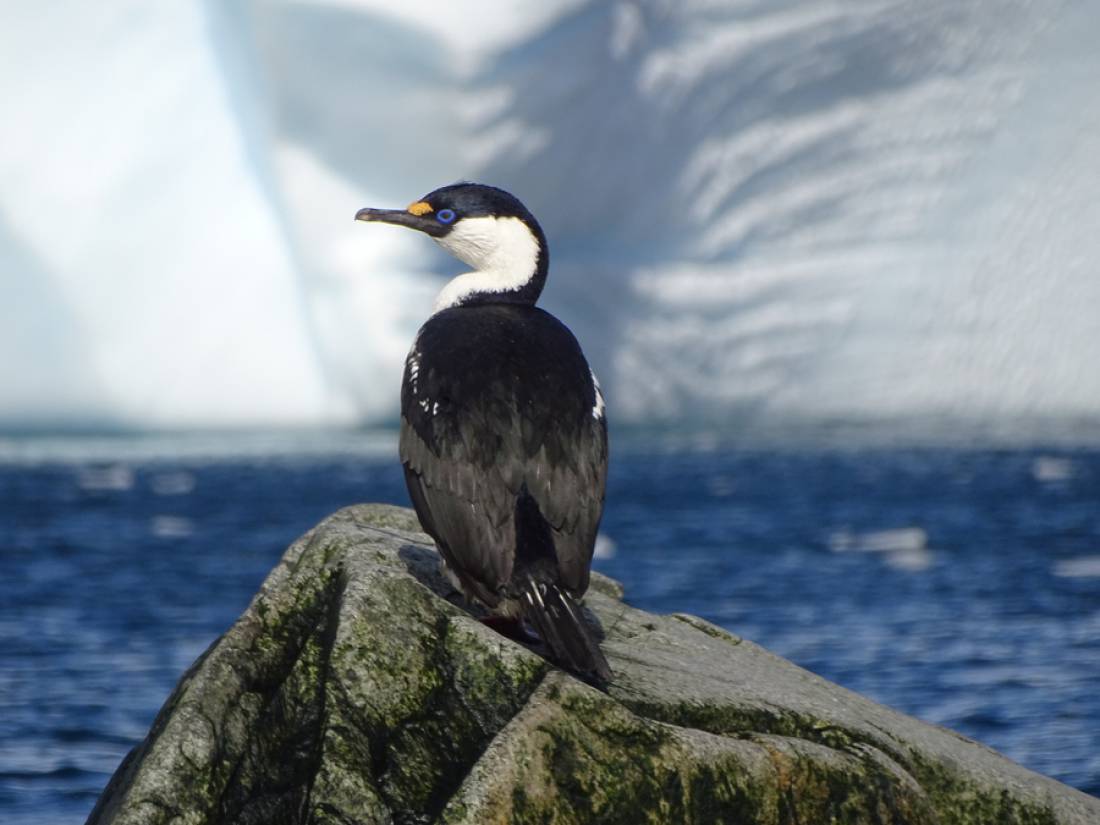 Story courtesy of Oceanwide Expeditions. All photos by Sarah Williams