Andrea Holbrook, president of Holbrook Travel, recently returned from a trip to Peru traveling alongside a group of Holbrook’s leaders and members of partner organizations. Thanks to support from LATAM Airlines and our in-country partners in Peru - they were able to take a comprehensive, albeit fast-paced, journey through many key regions of Peru. And what a journey it was! 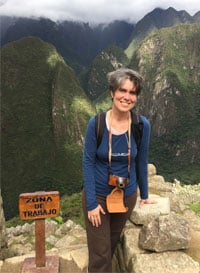 “At times we moved pretty quickly, yet there were countless moments I found myself stopped in place, awe-struck by this beautiful country, grateful that after all these years of traveling I can still be met with amazement.

“Peru has been an important destination in our history going back to the early years of Holbrook. I still remember hiking the Inca Trail as a youngster with my father and it is thrilling to know that today the trail is just as amazing and even better preserved today.

“We continue to work with this amazingly diverse country; from the world’s highest tropical mountains, to the world’s driest desert, the world’s most biologically diverse rainforest and one of the most spectacular archaeological patrimonies in the Americas.  It is a bit unfair that Peru has so many wonders for the visitor,” says Andrea.

Andrea chronicled her time in Peru in a series of photos, taken by her and fellow travelers, as they explored Lima, the Amazon, Cusco, the Sacred Valley, and Machu Picchu.

Lima is Peru’s most bustling city; a third of Peru’s roughly 32 million inhabitants live in Lima. 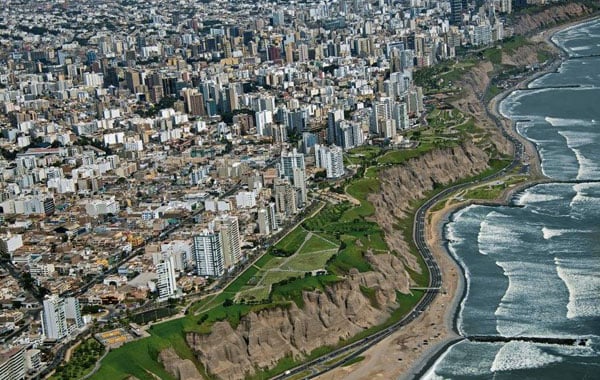 Though I knew about the aridness of the Peruvian coastline, it struck me particularly during this trip. I thought it ironic that coastal Lima is so damp because of the water vapor produced by the icy cold currents bumping up against the warmer air of the continent, yet it almost never rains. The Peruvian coast is bone dry.

We landed at a simple but modern airport of Puerto Maldonado (PEM). Flying over the Amazon basin was amazing. Seeing the brown snake of the Madre de Dios River winding through the endless plain conveyed the immensity of the territory.

We were headed to Soledad Lodge Lago Soledad a private tourism and conservation concession of some 11,000 hectares established in 2002.  The Amazon Research and Conservation Center (ARCC) is located here and combines tourism and research. Traveling to Lago Soledad is part of the adventure; first on paved road that becomes dirt road, followed by a motorized canoe ride up River Piedras. It takes 4-5 hours. We arrived to our rainforest abode – a sanctuary in the wilderness. 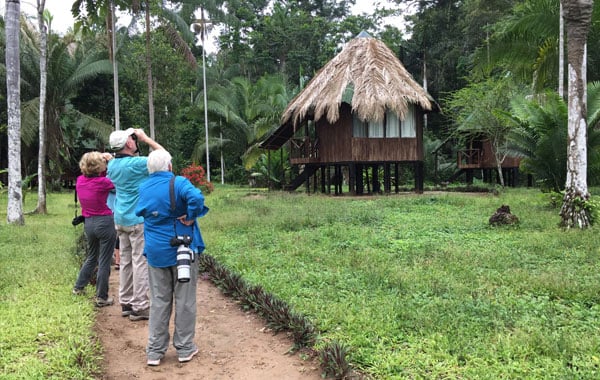 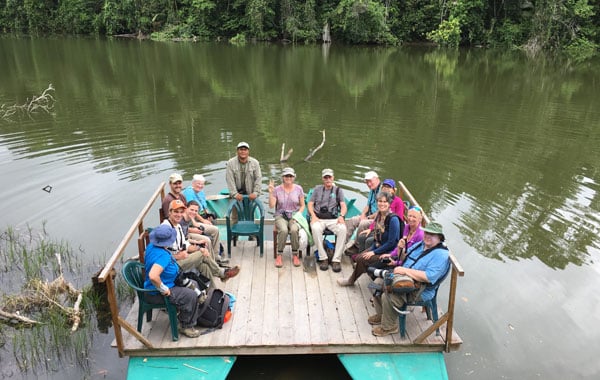 Where the Wild Things Are
Photo by Andrea Holbrook

Oxbow lake, dense forest. In the space of one day, scoping out wildlife from our simple catamaran cruise, we saw 4 species of monkey (Red Howler Monkey, White-fronted Capuchin Monkey, Black-capped Squirrel Monkey, and the Peruvian Spider Monkey) as well as a Giant Otter family. During our brief stay at Lago Soledad, we were able to see 37 bird species including the elusive Agami Heron, the Blue-throated Piping Guan, and the Golden-bellied Euphonia. 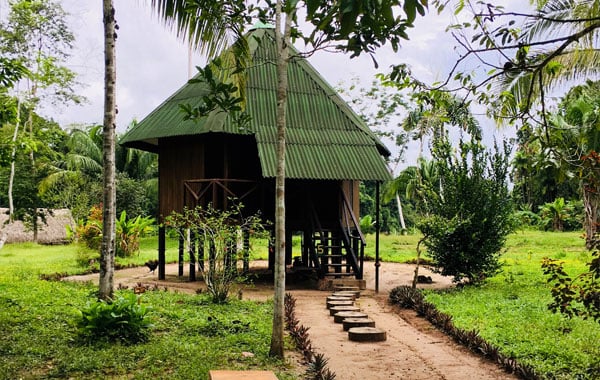 A Cozy Bungalow in the Jungle
Photo by Mariana Sarria (LATAM)

The bungalows we stayed in overlooked Lago Soledad. Being at Lago Soledad, which translates literally to Lake Solitude, reminded me of the good old days. Waking up to the noises of the forest is like awakening to a full symphony of harmonious music. There was no cell service and certainly no wifi; radio was the only form of communication.  It felt... good and right to be off the grid, even if only for a short time. 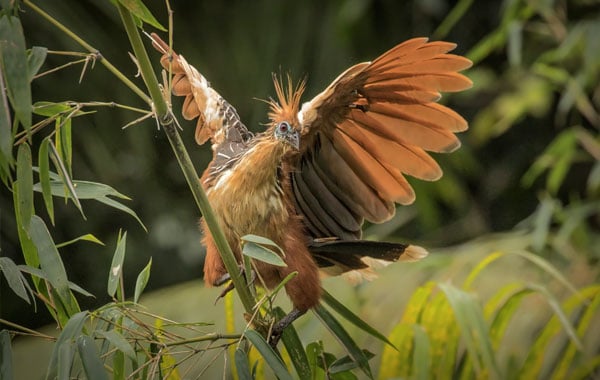 I learned from our walking encyclopedia (Rob Simpson) that these birds have evolved to form an enlarged crop used to ferment vegetable matter.  Their digestive system is similar to that of cows and other ruminants.  This is what causes them to have that foul odor.  We learned quickly how to identify their calls, which sound like hisses and grunts. 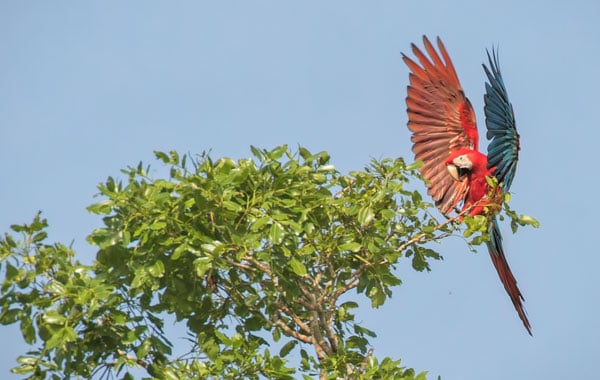 A Thing of Beauty
Photo by Cindy Cone

Yes, Red and Green Macaws are stunningly beautiful, especially when caught at exactly the right moment like our own Cindy Cone achieved in this shot. Though we endured some fierce morning mosquitos while watching the lick, it was worthwhile. 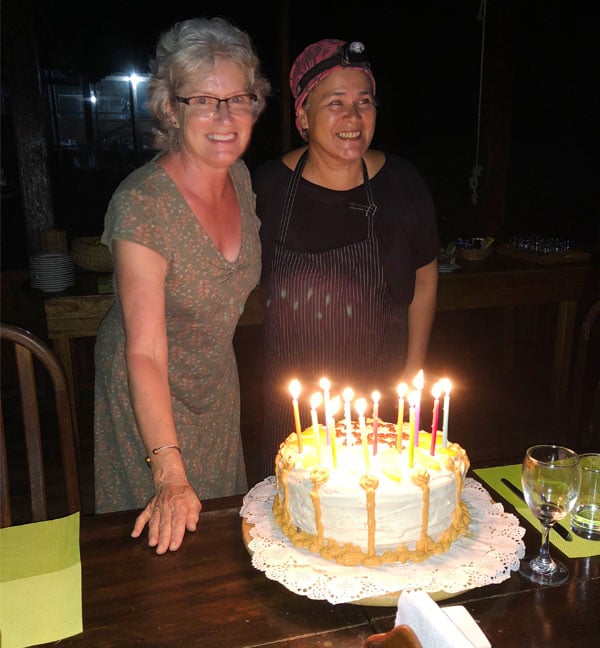 A Birthday in the Jungle
Photo by Andrea Holbrook

Leslie Duval of the San Diego Botanic Garden celebrated a birthday in Lago Soledad.   The hospitality of the head chef and general manager of Lago Soledad, Claudia Echegaray, was outstanding.   The meals were light and delicious.  And how, I wondered, did she pull off this beautiful cake in her simple jungle kitchen?  Passion is the word. 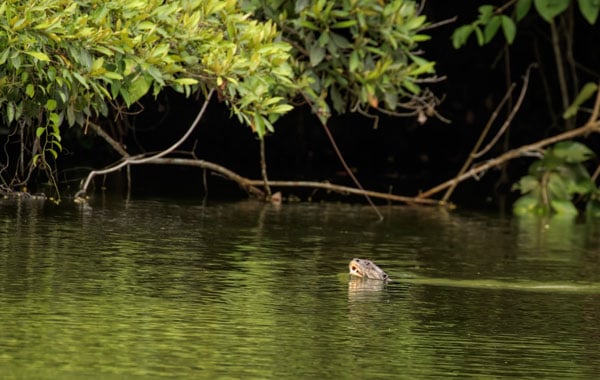 In the early morning, Ann Simpson and another member of our group were able to see giant otters crunching very noisily on their fishy breakfast.

It is amazing that the sacred valley was long ago revered as a sacred place by pre-Incan and Incan culture and centuries later it holds the same honor. Today the area is blessed with tourism (which is a significant source of income) in addition to being an agricultural heartland. 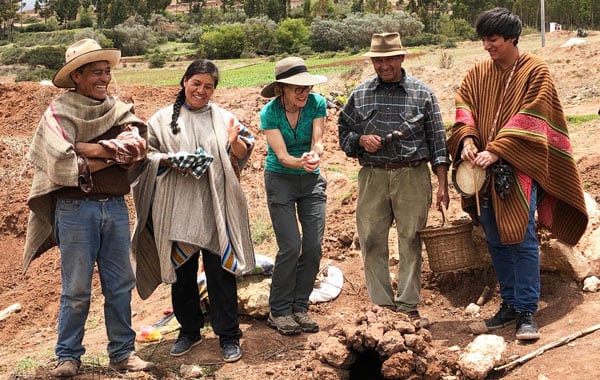 Patricia Kirkpatrick (center) from Golden Gate Audubon Society was enjoying the music and hospitality of the Jesusa Segovia (second from left) and her band from the Maras Community, where the salt mines have been active since before the Incas. 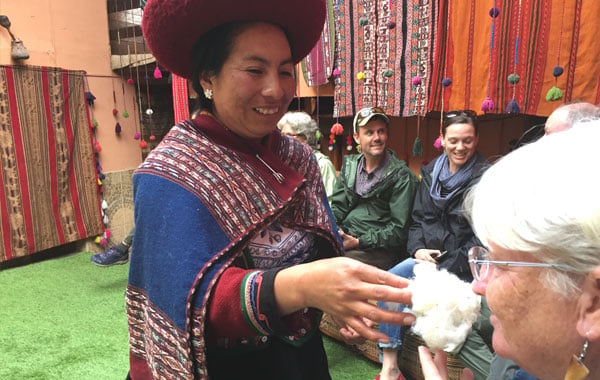 I was satisfied.  I finally got to see the place where real and authentic Andean weavings are made.   The knowledge and traditions passed down through the ages are astonishing.   It was shocking to learn these individuals weave complex patterns solely from memory. I believe tthe tourism income is actually helping to sustain trades that otherwise may fall to wayside. This young woman holding the wool that Cindy is sniffing was hysterically funny. 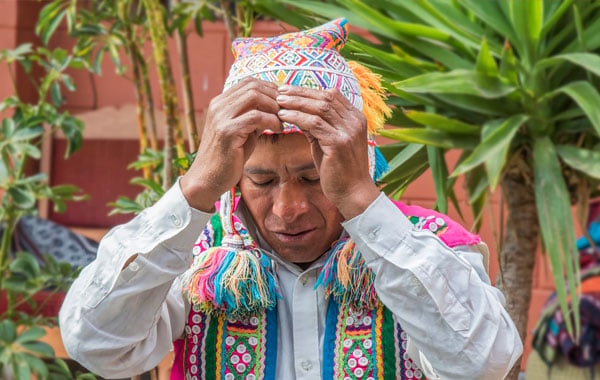 This shaman came from a village over six hours away to perform this ceremony.  It has been some time since I’ve been privileged to take part in an event like this one.  We watched intently as he carefully and patiently spread his cloth and paper and placed a variety of items atop the cloth – seeds, minerals, beads and other things.  Each of us was invited by name to incorporate our wishes into the ceremony. 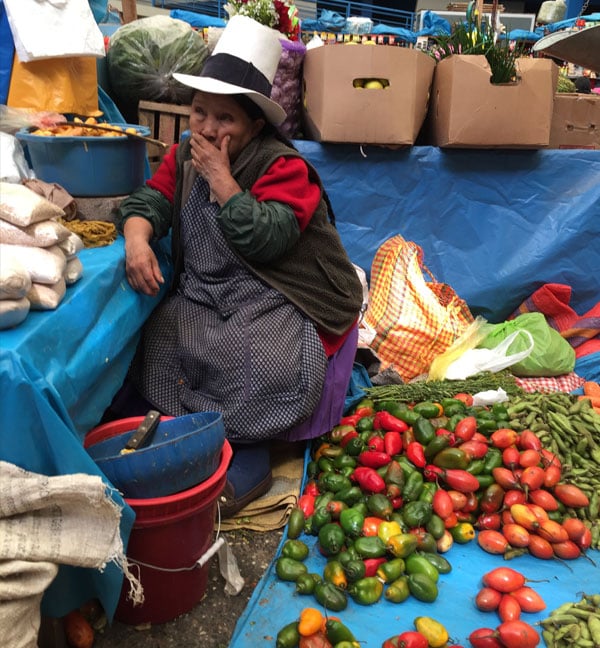 The older I get, the more I realize that indigenous knowledge is often extremely prescient. It is said that many indigenous cultures don’t like having their picture taken and view photography as a practice that can actually steal the soul. I have come to understand the value in that sentiment. Each year, the tiny communities of The Sacred Valley welcome hundreds of thousands of tourists with cameras in tow. Too much objectification from tourism could be troublesome; they are completely justified in wanting to protect their culture and way of life.

I’d like to pose a question to the photographers I know and respect: is it okay to take a picture like this if the individual is not aware they are being photographed?

Once upon a time Cusco was a quiet, isolated region, but today the city bustles with activity. So many different communities live in this city of roughly half a million people, and tourism is no longer confined to any special season.  Cusco has become a kind of cosmopolitan city, where Muslim, Asian, American and many other ethnic groups thrive. Cusco is one of those in a constellation of Latin American towns and cities that draws in people from other countries-- along with places like Cuenca, Ecuador, Boquete in Panama, Antigua in Guatemala, and Oaxaca in Mexico. 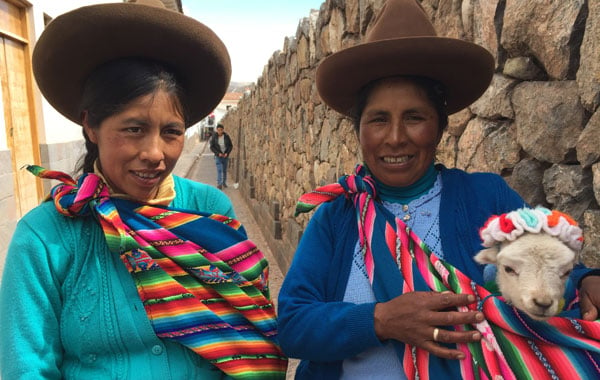 It's okay – go ahead, but quickly.
Photo by Andrea Holbrook

This picture taken in the Cusco market portrays a very different scene from that of the Sacred Valley market.  In Cusco, these ladies were scurrying around the Inca walls lest the local police chase them away.  They were offering their services as models for pictures, apparently this is not allowed in the city.   (Truly, how could you possibly resist that lamb with the corona?!) 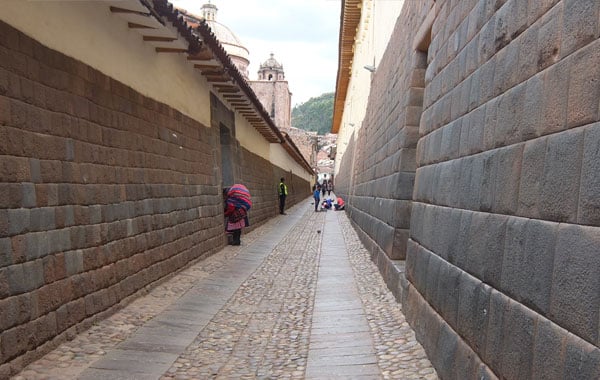 A Tale of One City... A Long One
Photo by Andrea Holbrook

One of the things that I love about Cusco is the exposure to a layered cake of civilizations. Pre-Incan cultures, then Incan, then Spanish. Here, the history is all around you. 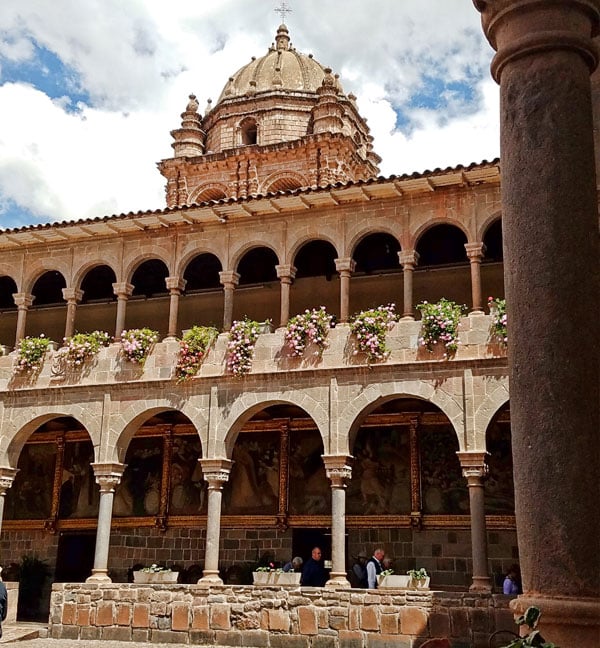 This sacred Incan site was the capital of the empire.  It was nearly destroyed entirely during the wars with the Spanish conquistadors in the 16th century.  The stonework of the Incan fortress forms the foundation of the Santo Domingo Church and Convent.  The Incan fortress was one of the richest Incan sites and its walls were covered in gold. 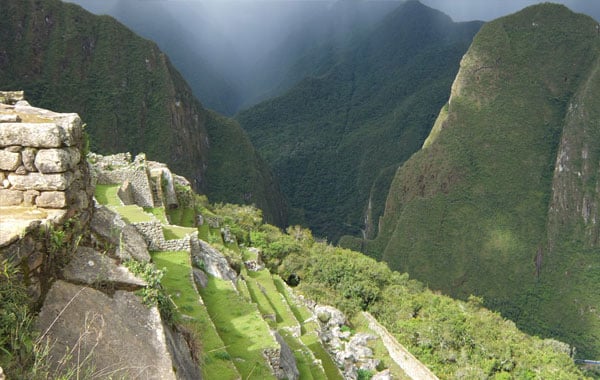 We had a marvelous day in Machu Picchu.  It was mostly overcast but the valley pictured here is absolutely magical.

And There She Is!
Photo by Andrea Holbrook

Now I understand how to take a photo of Machu Picchu in all its glory!  You have to work a bit harder, since this is taken from a structure known as the watchman’s tower, which is a 10 minute climb from the main entrance to Machu Picchu. At 8,000 feet, a short hike up leaves you a bit breathless, but it was totally worthwhile to have the real top view.