From the Field: Birding in Ecuador Photo Essay

In November, I hosted a group of 10 current and future Holbrook group leaders on a trip to Ecuador’s Chocó Andes and Eastern Slope. These amazing folks were a bunch of outstanding birders and were as blown away as I was by the incredible diversity of birds and habitats we were able to explore during our 10-day trip. In all, we saw 319 species!

Of those, 52 species were hummingbirds. That’s about 40% of Ecuador’s hummingbird species and about 15% of hummingbirds found worldwide! They’re always a favorite—there’s nothing like having them zip all around you near the lodge feeders.

We had a great time and mostly good weather too. Each stop on our fast-paced itinerary was amazing. I can’t wait to go back and spend more time at each location! 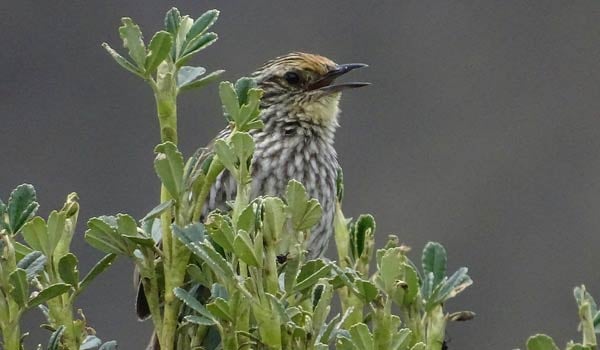 We got many of our targets here, including Andean Condor, Many-striped Canastero, and Silvery Grebe, and we were lucky enough to see a spectacled bear foraging across the canyon. 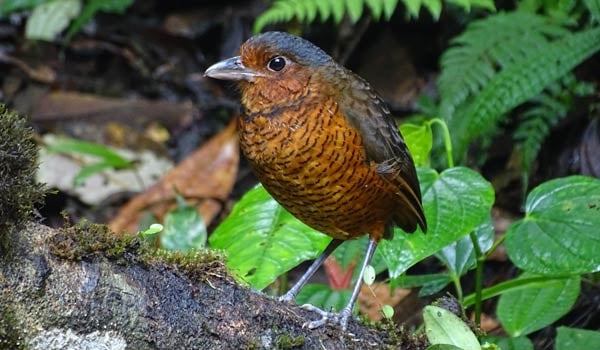 Two brothers, Angel and Rodrigo Paz, operate this family ecotourism business. We had an early morning at the Andean Cock-of-the-rock lek and later visited three antpitta feeding stations. Every day, Rodrigo gets up at 3 am to collect worms that they place out for the birds. The antpittas are all named, and it is the funniest thing to hear them being called: “Andreita!! Venga Maria!!” What a great day.

It all started one day years ago, when Angel was walking through the forest and discovered an antpitta was following him. Apparently this behavior is not unusual, as many birds follow ant swarms and large mammals, such as tapirs, as they move through the forest rustling up food for the birds. 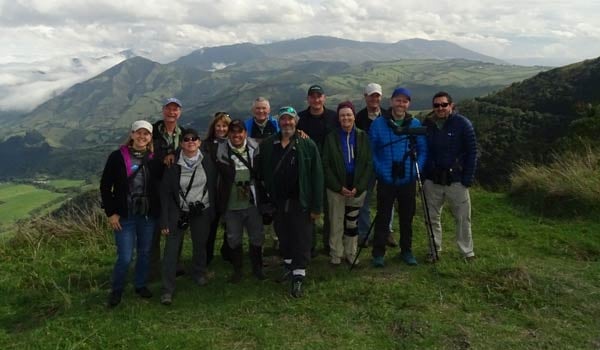 Group photo on the road to Yanacocha

Here, we were met by three members of Aves y Conservación, an NGO that is working to restore habitat for the endangered Black-breasted Puffleg, a type of hummingbird. The birds are super specialized, moving up and down the mountain. They do not come to feeders, so it is important to plant more of their native plants. 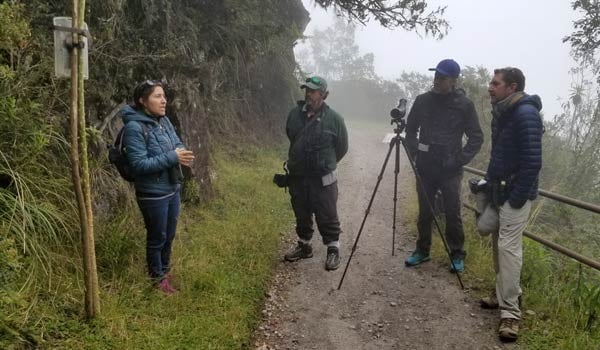 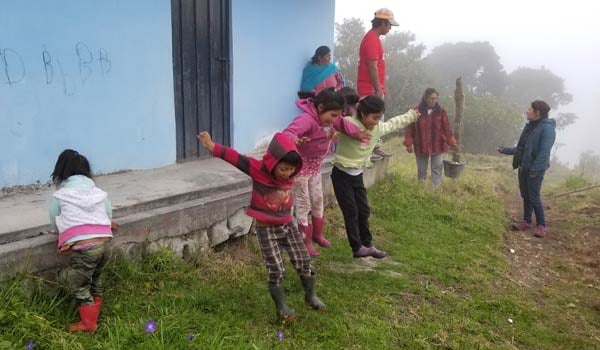 Tatiana has been studying the birds for nearly 20 years now. They use camera traps to monitor the feeding habits of these birds. Francisco is their resident botanist, and since it was a Saturday, his kids came and learned along with us! We met folks from the community of Alambi and saw the native plant greenhouse operation, and then we got to get our hands dirty planting. 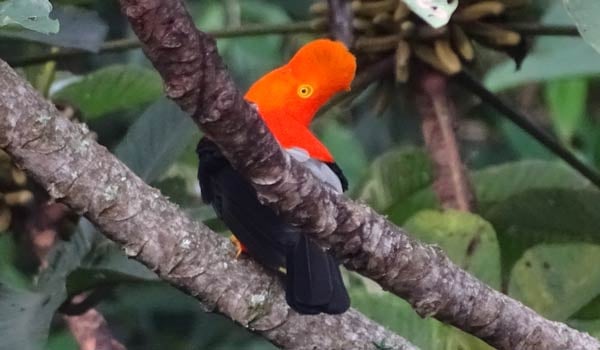 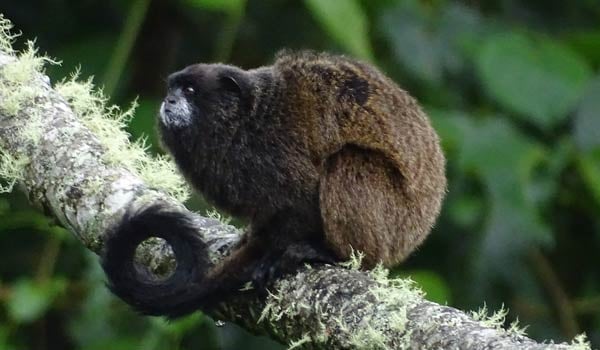 This is a great spot where you can sit on the veranda and watch the hummingbirds with your cup of coffee, rain or shine. Regular morning visitors are Andean Cocks-of-the-rock and these cute little monkeys. Well-placed hummingbird vegetation makes it ideal for photography. 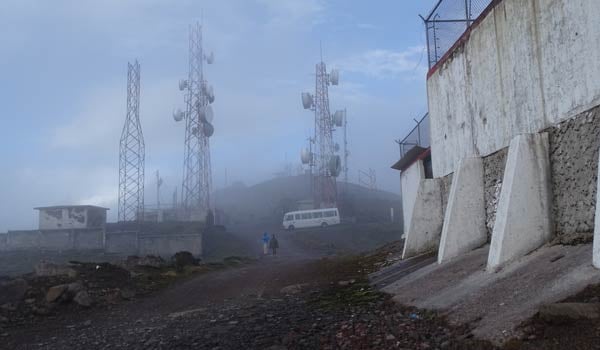 Birding for seedsnipe at Papallacta Towers

We were looking for seedsnipe but only got to enjoy the strange vegetation and eerie mist. It was freezing cold! 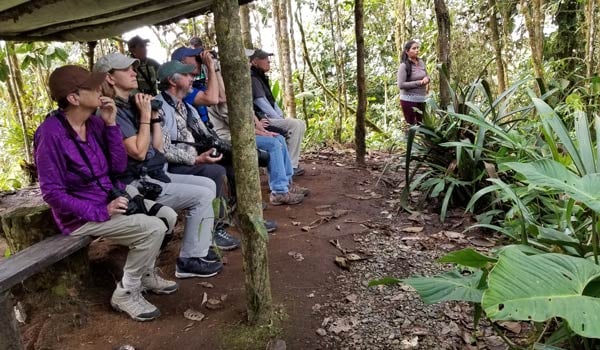 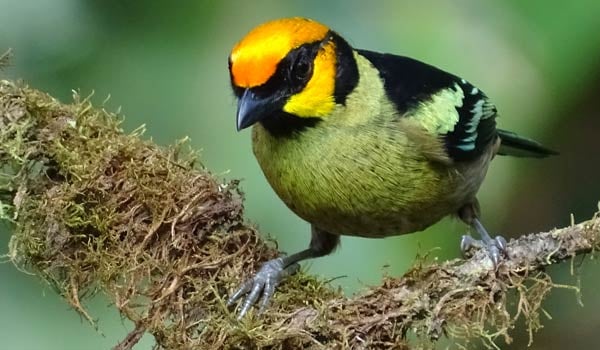 Here we were treated to some excellent light (for a change), and I was able to get some decent tanager shots. This is also a small family business. Doris stocks the well-designed feeders and calls the birds in for great photographs. 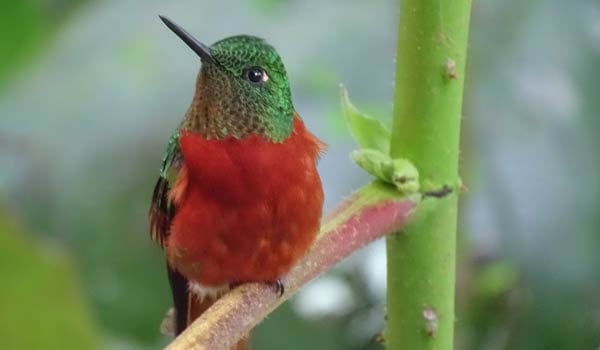 The Miconia tree is a very important tree for birds, and mixed flocks frequent them many times throughout the day. 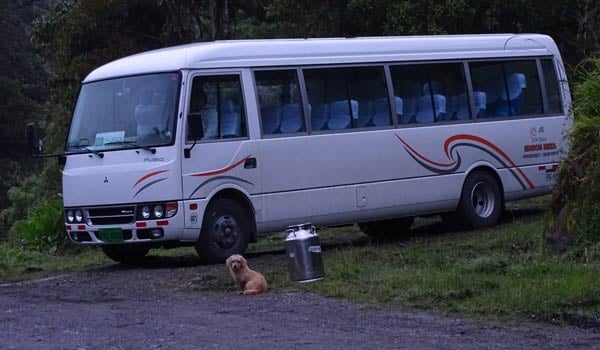 We drove up a small road, passing a milk truck that was picking up each farmer’s harvest of the morning. We had parked the bus and were out birding when a young man carried this heavy jug to place by the road. The man left, but the little dog stayed there guarding the milk can until the truck came to retrieve it.