Featured Article: Getting Creative about Travel at Nueva School

It was late August and the school academic year hadn’t even begun. But that didn’t stop Hillary Freeman and Cynthia Kosut from getting to work on giving their students the ultimate travel experience.

Earlier in the year, within days of their departure, the students were all packed to go overseas when the coronavirus canceled all plans. A similar scenario was playing out around the country. Students who were having or planning to have immersive international travel experiences found themselves suddenly captive to their bedrooms and monitors.

But Freeman and Kosut were not accepting the status quo - at least not for the annual spring travel program their school had been running for many years. The Nueva School, an independent K-12 school in the Bay Area, has a mission to provide outstanding, tailored education and to engage with communities locally and globally. A key component was the annual travel program.

When it became clear that spring trips would not happen, at least in their traditional format, Freeman and Kosut went into action. They reached out to Holbrook on a hot summer day to share the idea and brainstorm the program. The goal was to give the travel experience in a highly impactful, tangible manner as always, but incorporating interactive, live sessions with the in-country communities and scientists. It wouldn’t be your ordinary zoom meeting; it would be a week-long festival, with close bonding with the local people and in-country experts.

A Theme That Addresses our Times

A series of planning calls followed. The Nueva team came up with a theme to permeate throughout the program - “Diaspora,” a Greek term meaning “to scatter about.” Diaspora was not only a reference to population migrations, but to all species in the natural world. With racial tensions high across the country, and cultural sensitivity at a low, it was important to give perspective. The program would also tie in Social Justice, Environmental Citizenship, Design Thinking, and Social-Emotional Learning. 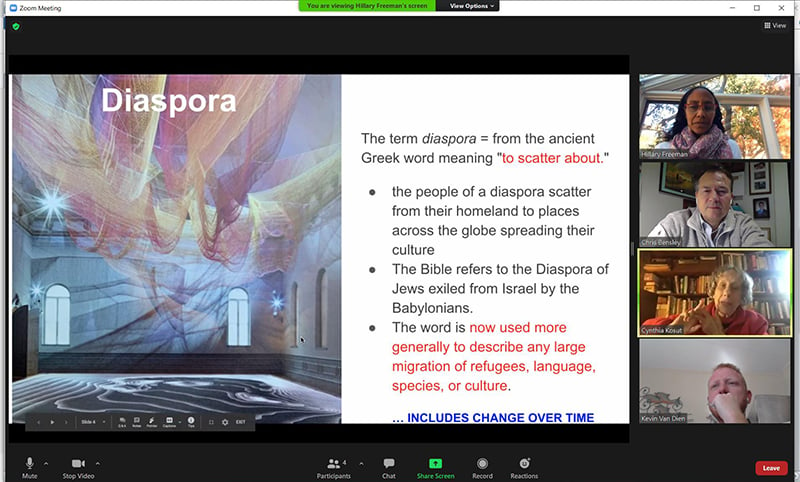 Deciding on the Curriculum of Experiences

The next step was to decide what programming should be provided. Nueva tapped into Holbrook’s network in Costa Rica, the 10th grade traditional destination, as a model that was then carried to other places. With nearly 40 years of relationships in Costa Rica, Holbrook proposed a list of over 20 varied experiences that covered multiple disciplines in science, arts and culture, community, conservation, and sustainability. A key member of the Nueva team, Michaela Danek, the 10th grade dean and science teacher, was back from parental leave to help shape the final curriculum. In addition to Holbrook, two other in-country partners were brought into the mix with experiences that offered students the ability to work with scientific data and visit the families in their would-be home stays. 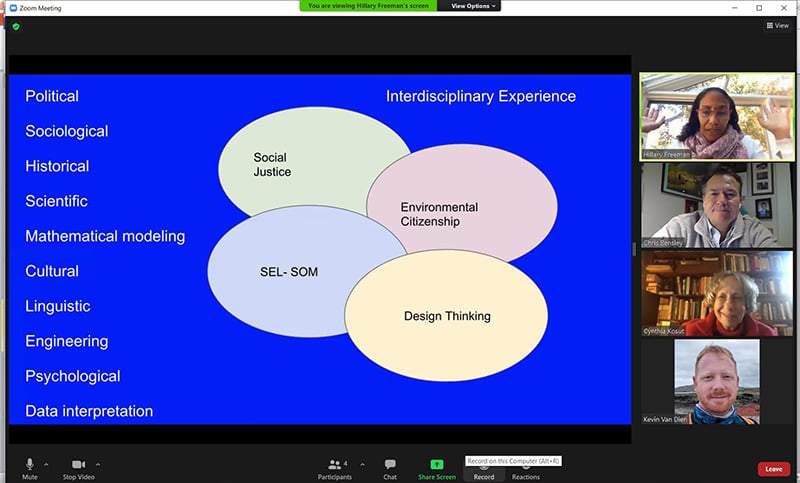 Gears in Motion - The Planning Challenge

Scheduling 112 hours of programming over 10 learning modules for 110 students in small groups in two languages has not been an easy feat. More planning sessions were held and logistics were addressed. Getting commitments and scheduling sessions was difficult with so many moving pieces and organizations. When conflicts came up, schedule shifts had a cascading effect. The latest wrinkle is from the improved Covid-19 situation in California, which is allowing Nueva students to be back in school on a hybrid basis, thereby altering certain activities like home cooking. 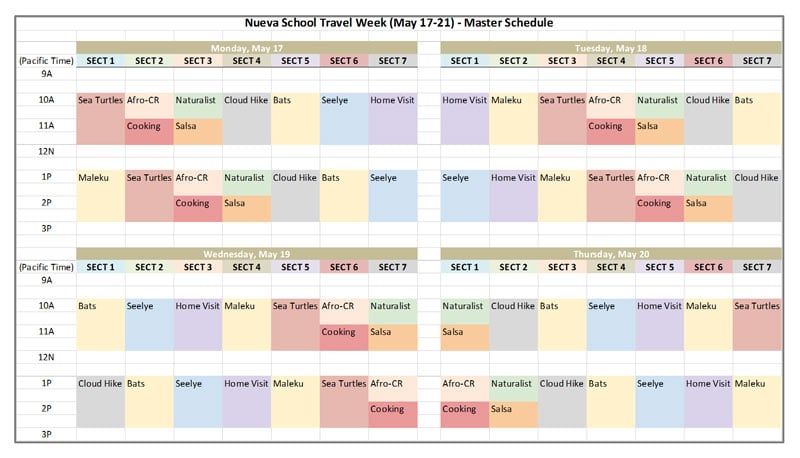 Dress Rehearsals and the Final “Performances”

With just over a month to go, like the playwright’s Opus, the Nueva team and their partners will be conducting multiple practice sessions to iron out any issues. This includes bringing into the mix a personal Costa Rican guide for each Nueva class section to facilitate their experience, with their own personal anecdotes. The more the students can visualize life in Costa Rica by meeting local people of all ages and geographies, the more they will absorb. In some ways, the knowledge from the virtual Travel Week may surpass the actual experience in some dimensions, certainly by the mix in landscapes. For example, the students will visit the remote village of Cahuita on the Caribbean coast, the cloud forest of Monteverde, the rainforest of Sarapiqui, the mountains of Talamanca, and the urban landscape of San Jose. They will learn salsa dancing, cook Costa Rican food, sing songs with locals, measure bats with scientists, and help with turtle conservation.

Looking to the Future

Freeman, Kosut, and Danek are excited that segments of this model will be adopted in future years, even when in-person travel returns. “We’ve tried to push the idea of virtual to the limit,” says Freeman, “in a realistic way, and one we could continue in the future.” First, the team is looking forward to the kickoff of the Travel Week.