Destination Spotlight: Should Madagascar be on your travel calendar?

It’s tempting to romanticize a destination from photographs. Madagascar is one of those magical places. It conjures images of exotic wildlife and flora – dancing lemurs, mighty baobab trees, spiny forests, stunning beaches. From its evolutionary isolation off the coast of Africa, Madagascar is home to unparalleled biodiversity with nearly 90% of the country’s flora and fauna endemic to the island.

But should this “must-see” destination be on your organization’s travel calendar? What is the current reality of travel to Madagascar? A closer look reveals a fragile beauty, encroaching deforestation, and limited infrastructure. However, with proper planning and clear expectations, Madagascar can surprise and delight travelers. 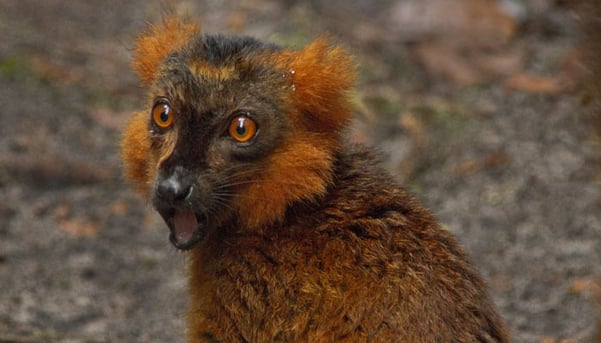 Home to some of the highest biodiversity on the planet

“The most remarkable thing about Madagascar is the biodiversity,” recalls Nancy Celick, who traveled with a group from San Diego Botanic Garden this past year. “There are over 100 species of lemur and more than 80% of plants are found nowhere else on earth. With that said, things are changing fast. Much of the island has been deforested due to the subsistence living of the native people.”

In fact, extinctions have already been going on for some time, say scientists at the Royal Botanic Gardens, Kew. “Dozens of species are known from old collections but have not been seen since. Extinction is happening all the time here. It is very scary,” Stuart Cable, leader of Kew’s research team in Madagascar, recently told The Guardian.  The 2017 Kew “State of the World’s Plants” report states that “Madagascar’s special trees, palms and orchids – which provide habitats and food for dozens of species of rare lemur and other animals – are now facing catastrophic destruction caused by land clearances, climate change and spreading agriculture. Habitat degradation is substantial and continuing.”

“We smelled the charcoal as soon as we landed with smoke hovering over the capital,” said Celick. “Despite this, the people were universally friendly, sociable and seemed happy. The modes of transportation were amazing, but most people still walk. And they love to walk to market." 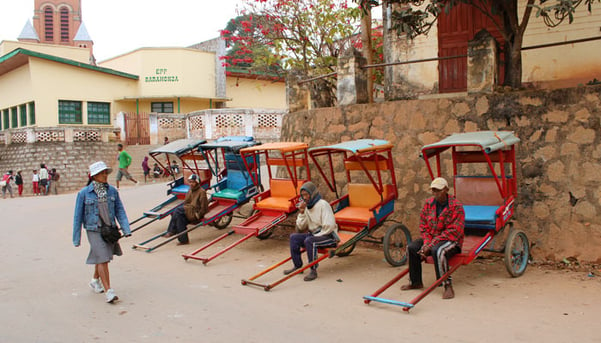 There is growing interest in the country as a tourist destination. The number of tourists visiting Madagascar increased by 20% in 2016, bringing numbers back to visitor levels last seen before a 2009 coup which slowed arrivals, according to the Ministry of Tourism. Figures released this year showed the number of visitors at 293,195 generating $702 million in revenue, still relatively small. Madagascar's government has promoted tourism as an economic development strategy as a way to reduce poverty and provide economic growth.

Currently in the early stages of development, tourism has large potential to grow as Madagascar's infrastructure improves. Roads are poorly paved and airline travel can be expensive and unreliable. Celick recounts, “It took us 4 hours to go 65 miles to get to what they call 'the deep south' where the spiny forest exists. The potholes were as big as the bus. Our drivers, who were excellent, had named the bigger ones and knew where every one of them was.” 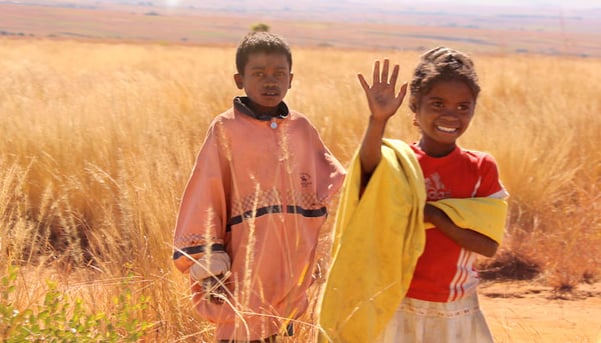 Madagascar’s human history is relatively recent. It’s believed humans first arrived to the island only 2,000 or so years ago. The country’s population has become a mix of the early Indonesian cultures that first settled here (Malagasy), as well as African, Arab, and French.

“The people were universally friendly, sociable and seemed happy. As we passed village after village, we would always see people walking along the road carrying their wares in all sorts of ways.” The SDBG group experienced a taste of Malagasy life while exploring Ambatolampy and visiting a local pot factory. Celick added, “Rice is the main staple which seems to grow everywhere but they still have to import 25%. Cassava is the main staple in the south. There is zebu in every village being herded by young boys. Zebu is a humped cattle that tastes pretty good but provides little dairy. The tools for farming are unbelievably primitive. A wooden, metal sheathed, plow pulled by two zebu (or men), a shovel-like tool and a scythe.” 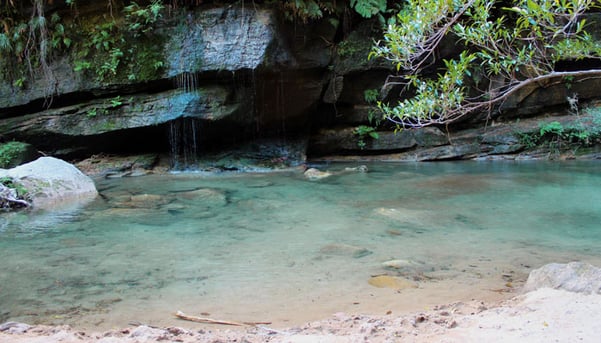 What travel planners should know

Madagascar is a destination that should be seriously considered for any organization that is offering natural history and cultural programs. The amazing biological diversity is supported by landscapes and ecosystems that include rainforests, cloud forests, spiny forests, deserts, savannas, wetlands, karst limestone formations, beaches, and coral reefs. With careful planning and proper expectations, travelers will come away with life-long memories and will support the protection of these endangered species. Travel planners need to research carefully and communicate the reality along with the many highlights.

Want to learn more? Holbrook Travel will be offering a FAM trip to Madagascar for travel planners this coming year. If you are interested in this travel opportunity please contact Sandy Doss at sandydoss@holbrooktravel.com.