“In the end, we did survive. But we never truly left the jungle behind. It permeates every part of us. I still have a deep love of nature, of jungles in particular, and mountains and coastline...”

In her recent bestseller, Holbrook lecturer and author Holly FitzGerald recalls her survival story on the Amazon many years ago. A great summer read (details below), her story is relevant to navigating the Amazon today at least in one aspect: the immense beauty and richness of the Amazon Rainforest is unforgettable.

Today, visiting the Amazon is one of the most enriching, safest and memorable educational adventures, high on most travelers’ bucket lists. Both the scale and remoteness of the Amazon offer unique travel experiences.

As a travel planner there are questions to consider: what are the ideal locations to visit in the Amazon? How do I narrow down geographic location to meet the needs of my itinerary and interests of group members? How to navigate all the options available? 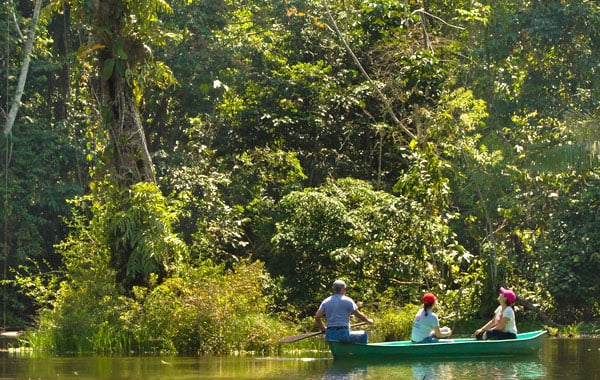 How vast is the Amazon?

The breadth and brilliance of the Amazon Rainforest is matched only by the river that shares its name. Spanning eight countries, the Amazon Basin is home to 1.4 billion acres of dense forests, half of the world’s remaining tropical forests, and over 1,400 miles of river, not to mention millions of species of plant and animal life. It breathes life into the planet, and the health of the Amazon directly correlates to the health of our world. The Amazon River, the largest drainage system on Earth, courses through the forests of South America with fervent power.

Over 60 percent of Peruvian territory is devoted to the Amazon Rainforest, yet it remains the least populated region of the country. The lowland jungle region or the Amazon Basin is home to impenetrable layers of vegetation, powerful rivers, indigenous communities, and incredible biodiversity—much of which is yet to be discovered. The seclusion and pristine qualities are what make the Amazon prime territory for ecotourism of all interests. With over 806 (known) species of birds, 293 species of mammals, 697 species of fish, and countless indigenous tribes, the potential for creating itineraries that match the interests of your travelers is virtually limitless. 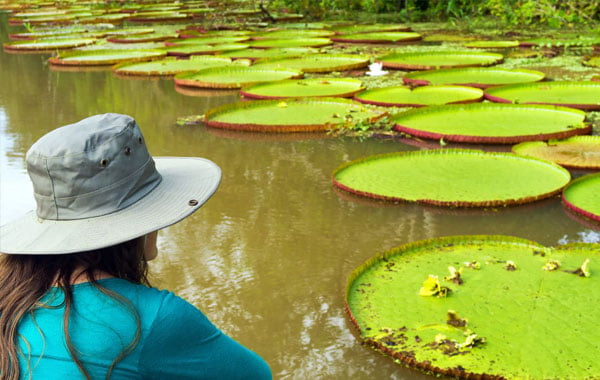 The bustling city of Iquitos lies in the northern section of the Peruvian Amazon and remains the largest city in the world that cannot be reached by roadways.  Nestled alongside the Amazon River, the city offers contemporary pleasures, like fine dining, museums, animal refuges, and other modern attractions, amid the wild of the rainforest that surrounds it. It’s also one of the two main launching points for entry into the dense northern track of the Amazon—ideal for wildlife viewing and cultural interaction.

From here, there are a couple of options for exploring this area of the Amazon Basin, most notably by river cruise or rainforest lodge. Each has their own advantages and disadvantages. Traversing the jungle by cruise ships, like the Amazon Star, offers participants accommodations with more amenities and allows travelers to visit a different location each day/ reach more remote areas. While rainforest lodges are typically less upscale—they are in the heart of the jungle, after all—they afford unique opportunities for focused wildlife viewing and exploration of specific areas and greater immersion in the rainforest atmosphere. That being said, if your trip is to center on specifics like more predictable wildlife viewing, guaranteed species sightings, or a certain conservation project, rainforest lodges may be the better option. If your group is interested in a broader, more general travel experience, with “closer to home” comforts, a river cruise is likely the better choice. There is also the option of creating an itinerary that includes both a river cruise and a land stay—the best of both worlds. 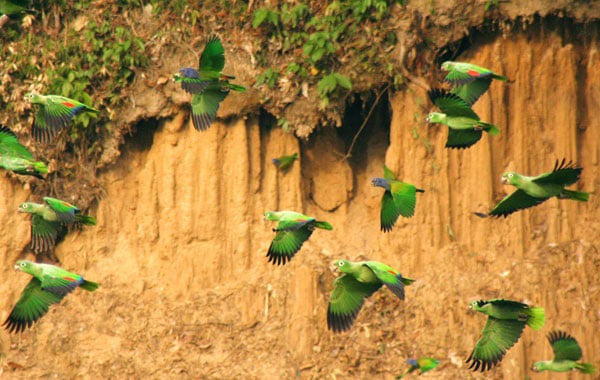 The port town of Puerto Maldonado sits in the south region of the Amazon Basin, where the Tambopata and Madre de Dios rivers converge. It’s also the second main point of entry into the jungle. Overall, Iquitos is the more popular of the two cities, as it offers both river cruises and jungle lodges. While Puerto Maldonado offers primarily land-based programs (with the option of day trips on the water), it makes up for this in intrigue. The southern strip of Peruvian Amazon is more off-the-beaten-path and because of this offers unique opportunities, specifically for birders and academic travelers. Home to Tambopata National Reserve and Manú National Park, the southern Peruvian Amazon has spaces where the dense vegetation breaks and opens up to oxbow lakes and several clay licks, where hundreds of birds, most notably macaws, come to feed. “At Tambopata we went to the famous Macaw clay lick where hundreds of macaws were eating the clay. It was a beautiful and amazing site,” recalls Lisa Palmese-Graubard, experienced travel consultant for Holbrook, who has been to the Amazon in both Peru and Ecuador.  The lodges that border the riverbanks in this area provide the most direct access to primary jungle and as a result some of the most renowned centers for Amazonian wildlife study have developed here. Educators hoping to develop an itinerary focused on biodiversity and biological studies need look no further than the living laboratory of the Puerto Maldonado region of the Amazon. 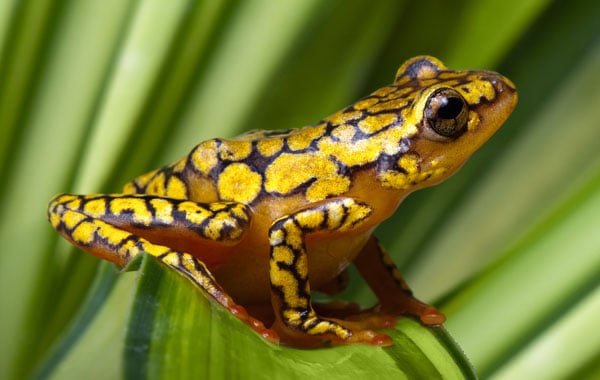 Although not as prominent as the Peruvian Amazon, Ecuador’s share of the jungle is noteworthy in its own right. Ecuador is one of 17 countries worldwide that have been declared “megadiverse,” meaning it harbors a great deal of the Earth’s species. Furthermore, the country has the highest number of plants, invertebrates, amphibians, reptiles, fish and mammals per square kilometer, in large part due to the Amazon.

“We visited the Rainforest Alliance community programs that included lodges run by native communities as a way to support themselves and their people.  I was very impressed with the Napo Wildlife Center which was run by the Kichwa Anangu Community.  We learned about their history, their plight to survive and how they decided to support their community by using eco-tourism instead of selling off to the oil companies who come in and destroy their lands and leave when they’re done,” stated Lisa. 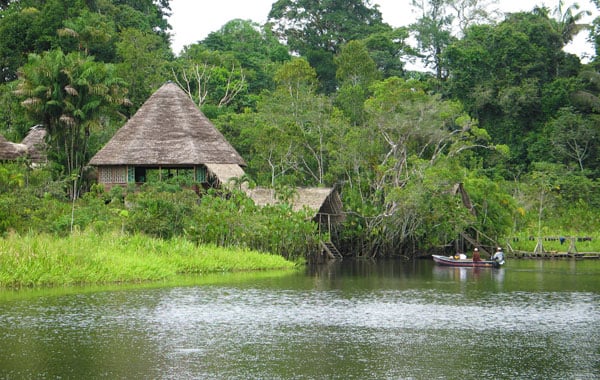 The Amazon Rainforest accounts for the largest portion of the country, and Yasuní National Park in Ecuador is the most biodiverse ecosystem on the planet! The park is home to 150 species of amphibians, 121 species of reptiles, over 200 species of mammals, over 596 species of birds and 382 species of fish.  If you’re looking for cultural exchange there are nine indigenous nationalities that reside in the Ecuadorian Amazon, many of whom welcome tourists. Learn about traditional ways of life and the use of medicinal plants, abundant in the rainforest. Adventure seekers can go kayaking through rivers and lagoons and hike through unspoiled areas of primary forest amid the company of toucans, monkeys, and other wildlife that call the Amazon home.

The Global Significance and Power of the Amazon

The Amazon is arguably one of the most important, if not the most important ecosystem on the planet. Not only as a travel destination or a haven for wildlife, its significance extends to all corners and all creatures on Earth, as it houses essential natural resources. Conservation is not only a venerable cause, but one that is indispensable. The Amazon is considered the “lungs of Earth” as its trees absorb vast amounts of carbon dioxide and in turn release the oxygen we breathe. Close to 20 percent of the world’s total oxygen supply is generated by the Amazon and nearly 1,100 streams join to form the Amazon River, which accounts for 20 percent of the world’s fresh water. Other vital resources produced by the Amazon include minerals, like gold, copper, zinc and silver, medicinal plants and global food supplies. 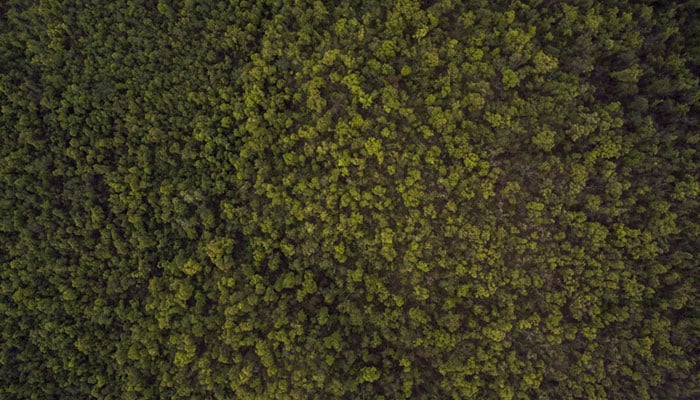 In writing this article we were fortunate to speak with author Holly FitzGerald, an individual who experienced the strength and wilds of the Amazon firsthand while fighting for her life during a honeymoon trip gone terribly awry. FitzGerald’s book, “Ruthless River,” chronicles her experience of survival by raft on one of the rivers in the Amazon Basin.  Her story has many messages to glean, but FitzGerald sums it up best here: 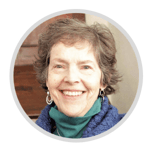 The Rio Madre de Dios. Always the river winds slowly or swiftly, in my mind. Fitz and I were lost, trapped in the completely flooded jungle of Bolivia for 26 days, alone, without food. Young newlyweds, we had missed our boat and there would not be another for at least three months. We had missed it because of a delay when our plane crash-landed. So we outfitted a log raft and took it hundreds of miles through the jungles of Peru and Bolivia, not realizing that the journey would remain within our thoughts, dreams and the fiber of our lives forever. By any fair reckoning we should have died there.

In the end, we did survive. But we never truly left the jungle behind. It permeates every part of us.

Years later I still have a deep love of nature, of jungles in particular, and mountains and coastline as well. From our harrowing experience I gained an intense appreciation and gratefulness for life. I’ve learned that a feeling of hope and determination can make things happen, can change the outcome.

The Amazon, seemingly untouched by modern development, is a humbling reminder that there still remain pockets of Earth that are unspoiled and ruled only by nature.