Destination Spotlight: Colombia – With New Peace Accord, Is It Time To Go?

From the Field, Destination Spotlight

You’ve heard it before: peace deal in Colombia. Is it for real or not? As it's turning out, the new agreement is taking hold, as shown by the signing of the Peace Accord in November and weekly news that supports a permanent peace with rebel groups. So is it time to go?

Travel operators are stepping up their programs in Colombia. Even before Colombian President Juan Manuel Santos received the 2016 Nobel Peace Prize, the country had been operating without incidents for several years, and travel companies have been running tours for Americans. U.S. Operators like Road Scholar, Overseas Adventure Travel, and Holbrook Travel run a myriad of programs.

“A Great Time to Visit”

Holbrook’s team recently traveled to Colombia to attend a travel conference and can attest to the growing excitement of travel, as well as to the many treasures in this country. We talked to members of the travel community, industry leaders, and government officials. “Now more than ever is a great time to visit Colombia,” says John Myers, Director of National Audubon Society’s Latin American program. “The infrastructure is opening up and the Colombian people are very welcoming." Christopher Calonje, founder of Colombia Birdwatch, was similarly optimistic that new times of peace were giving tourism a second wind: "Thanks to the peace agreement there is good news, and more foreigners are coming to the country."

So why not put Colombia on your list of new destinations for your organization? There are many faces of Colombia to explore, from the bustling capital of Bogotá to the verdant hills and traditional villages of the coffee region, to Medellín, one of South America’s most progressive cities. For nature lovers and birders, Colombia has greater biodiversity than anywhere else on earth. Over the last several years, a number of ecolodges have been built, but the infrastructure is behind that of other countries like Costa Rica and Belize.

A Mecca for Birding

Colombia has the largest number of bird species in the world, at nearly 2,000, plus a variety of terrains to explore. On Holbrook’s recent trip, other visitors expressed their approval. “Colombia has got to be at the top your list of places you want to visit," said Nate Swick from the American Birding Association. “You can see more species of birds in one week than in your entire life in the United States." Dorian Anderson, a writer and photographer from Los Angeles, added, “I’ve never been to the Páramo before and it's amazing! Lots of birds, unbelievable scenery. We’ve learned so much about Colombia, its birds, its economy, its culture and friendly people. It’s really been a great trip."

Birding will continue to get attention, as the Colombia government just launched a new initiative to promote birdwatching at a three-day conference. The first day was an impressive gathering that brought together leaders from government, industry, tourism, and conservation. The conference included a tour to some of the best spots around the Sierra Nevada de Santa Marta, such as Río Blanco, Los Nevados, Otún Quimbaya, and Parque Ucumari. 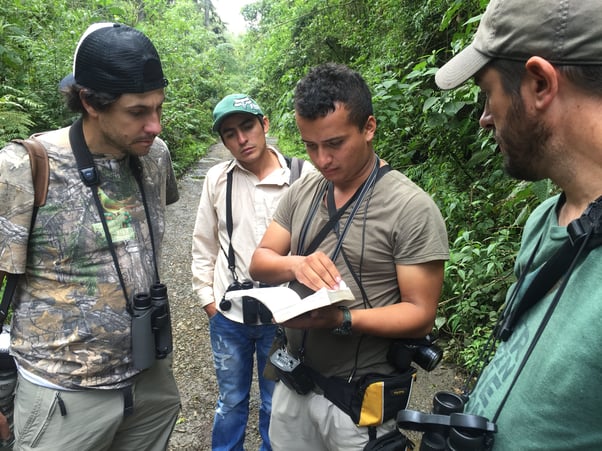